The effect of fluid flows on active interface dynamics or particles transport is relevant to a wide variety of processes such as interface growth in liquids, population dynamics or bacteria transport in fluids. In this talk I will first address the behavior of a self-sustained reaction front in the presence of a disordered flow. Resulting from the balance between molecular diffusion and nonlinear chemical kinetics, autocatalytic reactions can generate traveling fronts, providing a suitable system to study growing interfaces in fluid flows. When coupled to a disordered flow field, these fronts exhibit a complex behavior leading to different propagation regimes with distinct morphologies. I will show that the experimentally measured spatial and temporal fluctuations of the front positions become consistent with three distinct universality classes when tuning a single parameter, i.e. the mean flow velocity. Intriguingly, these fronts can also exhibit frozen steady states with a sawtooth pattern, over a certain range of flow rate.

In the second part, I will focus on the dispersion phenomena of non-passive particles in complex flows. Even in laminar regimes, the irregular chaotic behavior of a fluid flow can lead to effective stirring that rapidly redistributes fluid particles throughout the domain. When the advected particles possess a finite size, their trajectories can become different from passive particles depending on their intrinsic properties. I will present details of numerical simulations and laboratory experiments that investigate the behavior of finite size particles in 2-dimensional flows. More specifically, I will show that neutrally buoyant particles dynamics can markedly differ from passive tracer when they exhibit a nontrivial shape. Elongated particles tend to align preferentially in the fluid flow direction and alter the underlying Lagrangian coherent structures, facilitating segregation between particles of different shape in the same flow field. 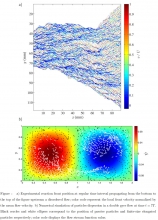 Séverine Atis is an experimental physicist. She did her PhD at Université Pierre et Marie Curie in Paris on reaction wave fronts propagation in disordered flows. After a year of fellowship in the Mechanical Engineering department at MIT, where she studied anisotropic particles clustering in chaotic flows, she is now a postdoc in David Nelson’s group at Harvard University and works on bacteria range expansion experiments. Her interests include out-of-equilibrium phenomena, internal waves propagation in complex stratification, turbulence and superconductors.