Title: Biomechanics and evolution of flight in stick insects

How and why did insects evolve flight in the first place?

Flapping flight was first evolved in wingless ancestors of winged insects some 500 million years ago. A fundamental challenge for our understanding of origin and evolution of insect flight is to explain the mechanisms responsible for transitions between flightlessness and full flight capabilities. For example, what are the mid-air maneuvers before flight was evolved? How did winged organisms undergo intermediate stages during the evolution between flightlessness and powered flapping flight? These questions were addressed using the stick insects (Insecta: Phasmatodea), a group of herbivore insects exhibiting tremendous diversity of wing size.

This talk will feature two studies. (1) The first step towards aerial maneuverability is the ability of correcting body orientation mid-air after perturbations, such as upside-down falls. The first study highlights how the wingless first instars of the stick insect Extatosoma tiaratum rapidly reorient during upside-down falls. Detailed 3D motion analyses revealed a series of leg reflexes regulating airspeed to enhance the rate of reorientation and reduce fluttering. (2) In the second study, the correlations between flight capability, wing kinematics and aerodynamics were studied in different stick insects of various wings sizes through laboratory experiments and fieldwork at Southeast Asia. The integration of biomechanics and phylogenetic approaches was used to address complex inter-correlations between morphological, kinematic and functional aspects of flight. This study provided a general mechanism for explaining flight-flightlessness transition, which may help explain how wing flapping movement first evolved. 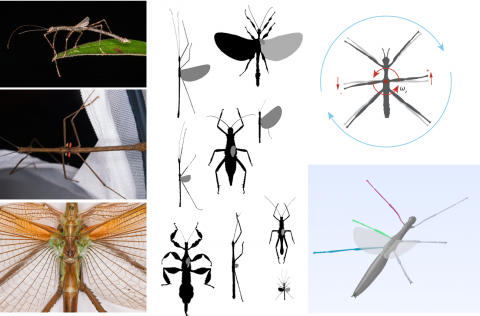 Biography:
Yu Zeng recently joined Bin Liu’s lab at UC Merced. He received his Ph.D. from Department of Integrative Biology, UC Berkeley, where he studied biomechanics and evolution of flight. He earned his bachelor’s degree in biological sciences from Sichuan University and was an exchange undergrad at University of Washington. He is mainly interested in studying biomechanics and evolution of organisms’ locomotion.